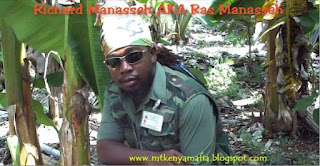 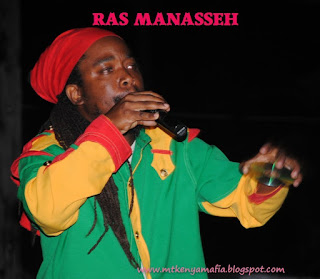 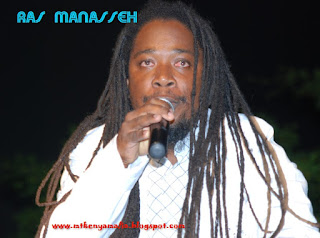 They say Ras Manasseh could be the next big thing out of Portland Jamaica...for he is a conscious & vibrant Artist!
Formerly Prince Kamau, now Ras Manasseh, this native of St. Mary, Jamaica, but now living in Hart Hill, Portland, Jamaica. Ras Manasseh has recently sprouted his musical wings, and now sees the world as his influential artistic domain.
With the culturally deep, rich, and powerful voice which belies his size; Ras Manasseh is now an important member of the Jamaica Association of Vintage Artistes & Affiliates (J.A.V.A.A), and is a much anticipated performer on the shows. Ras Manasseh is also a member of the Jamaica Association of Composers, Authors & Publishers Limited (J.A.C.A.P). Ras Manasseh is also now a member or the Hart Hill Police Youth Club (H.H.P.Y.C) and is the Vice President for the Club. In 2002 he linked up with promoter /producer “Augustus” and his series of “Marcus Garvey Celebration show. His first two recordings are “Kimmoly” on the “New Regime” label, and “Boom Boom Boom “on “Mount Africk Production” label.
His most recent songs are "STUDY YUH BOOK”, "MY PAIN", “NEW START” & “MANKIND UNITE” Study Yuh Book is produced by Dwight Pinkney which is on the “Love & Peace” Album, the song “Study Yuh Book” also won an award at Roots 96.1FM on the “What’s the Verdict Award program” My Pain is produced by Grub Cooper & Dwight Pinkney which is on the "J.A.V.A.A TO THE WORLD" Album, the song New Start is collaboration with Ras Manasseh and an Artist from Switzerland named Yvan Messerli and the song is produced by Yvan Messerli and Ras Manasseh, the song Mankind Unite is a collaboration with Ras Manasseh and El Bastard’o from France and the song is produced by El Bastard’o and Ras Manasseh and he have also done other songs with other producers.
Ras Manasseh has performed at numerous places in Jamaica, "Sting 2011" at Jamworld in Portmore St. Catherine, "Gadaffie Family Funday And Pool Party" at Summerset Falls in Hope Bay Portland, "St. Mary Mi Come From" put on by popular Artist known as Capleton at the Graze-inn sports complex in St. Mary, J.A.V.A.A. "Tribute to Bob Marley & Dennis Brown" at the Jamaica Pegasus Hotel in New Kingston, (N.E.E.T) "Negril Education Environment Trust” Family Fun-day Event at Waves complex in Negril, "Institute of Jamaica" in Kingston, “Boom West Portland Star Fever” talent show in several communities in West Portland of which Ras Manasseh was the MC of the shows just to name a few.
Ras Manasseh musical career was influenced by Artist's like Bob Marley, Dennis Brown, Buju Banton, Jah Cure, Capleton, & Sizzla etc.
Richard Manasseh aka Ras Manasseh is very talented, humble, and ready to take on the world with his vibrant styles and conscious lyrics.
Anyone who is interested in Ras Manasseh,ie, Promoters, Selectors, Radio DJs, and Television stations,just to name a few. He can be contacted /via
Telephone: 355-3976 or 367-6968 or 837-8032
E-mail Address: rasmanasseh@yahoo.com
mountafrickproduction@gmail.com
hortense.clarke@yahoo.com
ruirupithecus@gmail.com
YouTube Link
http://www.youtube.com/results?search_query=ras+manasseh&oq=ras+mana&aq=0&aqi=g1&aql=&gs_l=youtube.1.0.0.2925l9503l0l11772l5l5l0l0l0l0l584l989l4-1j1l2l0.